Hamlet with a modern twist. An unborn baby witnesses its mother’s betrayal when she shacks up with her husband’s brother. Mother and lover then plan to murder the husband. What can the unborn child do?
Extremely funny, mildly tragic and beautifully written. Ian McEwan in top form.

After being hooked to  the Netflix series “You”, based on Caroline Kepnes” novel, I then read the continuing story of Joe in “Hidden Bodies”. After that there was no way I was going to leave it there. Such a brilliant writer cannot be just brushed aside. I leaped straight into “Providence”, a propulsive and original thriller.

I must admit that at certain parts of this book I was on the brink of losing interest, but I was always pulled back in by Caroline Kepnes’ magical prose. A true delight.

At the end of my journey through this book I feel it was all worth it. This is a tragic love story, a story that can bring tears to your eyes. It’s also creepy and thrilling and if you’re a fan of H.P.Lovecraft, it’ll make sense on another level. If you’re not a fan, or you’ve never read H.P.Lovecraft, then maybe it’ll  inspire you to read some of his stories.Whatever, this is a great read and I look forward to Caroline Kepnes’ next book.

We’ve just finished a short run in Malmö and Copenhagen of Edward Albee’s funny and provocative play “The Goat – or Who is Sylvia?”.

I played Ross Tuttle, the best friend of the lead character, Martin Gray. It’s an interesting role. Our director, Boel Marie-Larsson, wanted to bring out the elements of Greek tragedy, which are woven into Albee’s text  (he even subtitled the play: “Towards a definition of tragedy”). To this end we actors were given an overview of “The Hero’s Journey”, based on the mythologist Joseph Campbell’s “The Hero With A Thousand Faces”.

For an actor this was huge fun. Instead of building a character around  the standard character bio, we were asked to think about our characters more as archetypes. Martin Gray is the hero, a man with an almost perfect life – a successful career, a happy marriage and a perfectly ok relationship with his newly outed teenage son Billy. Everything seems hunky-dory until  an in-confidence chin-wag with his best friend Ross Tuttle reveals that he’s been having an affair with a certain Sylvia. Ross Tuttle, my character, turns out to be the archetypical trickster character – confidante, stirrer-up of trouble, a catalyst, the one who causes the shit to hit the fan and then washes his hands of any moral responsibility for the turbulence that ensues.

I had trouble with this to begin with – trying to join the dots between the archetype (other examples of this “trickster” archetype are Bugs Bunny,  Jack Sparrow, Jimminy Cricket and a zillion other comic sidekicks) and a realistic character who would be believable in the context of the play. I fumbled around with various voices, movements and gestures but couldn’t really pin him down.

At one point I so wanted to resort to the safe option of the character biography, but I knew in my gut that this approach was at best a refuge and at worst a cop-out. I discussed it with Boel. She described Ross Tuttle as a deeply insecure man who has lived his life in the shadow of  his best friend, Martin,  and nurses a deep resentment. He is a man who plays the game of life according to certain moral rules of what is acceptable and what is not. Break these rules and you’re in deep shit.

The character of Ross Tuttle is a TV presenter. He’s a man who hides his insecurity behind a laddish swagger. It might sound corny to say it, but I eventually stumbled on the key to making Ross more than just  a flat “trickster” archetype. The answer lay in the name – Ross. I hit upon the idea of basing him  on the real life TV presenter Jonathan Ross.

Now, as an experienced character actor I realized that a mere impersonation of the mannerisms of Jonathan Ross wouldn’t work in the context of this play. They were a starting point but I wanted my interpretation of the character to have more depth and color. I hope I succeeded and I hope that by the time Ross Tuttle hit the stage on the opening night, nobody even saw the link to Jonathan Ross. And that is something I’m glad for. I hope I covered my tracks pretty well.

The interesting thing was that I could not be in the play when it transferred to Copenhagen, so we brought on the very talented Canadian actor David Barrett to take on my role. This was a peculiar experience – in the beginning I coached him in the archetypical aspects of the role, but then left him in the hands of the director, Boel, to build his own version of Ross Tuttle.

I went to see the Copenhagen show. It was a hugely enjoyable experience to see how my colleagues in Playmate –  the wonderful  Kevin Benn as Martin, the brilliant Vanessa Poole as his wife Stevie and the phenomenal Jeff Bond as their son Billy, had shrugged off any inhibitions and really let rip.The show rocked!

And this was enhanced by David Barrett’s highly entertaining, mischievous version of Ross Tuttle. Some people have asked me if I found it strange to see someone else step into the role I’d played just a couple of weeks before. I can honestly say it wasn’t in the least bit strange. Because at the end of the day it’s all about whether or not the play works. And in this case it worked. 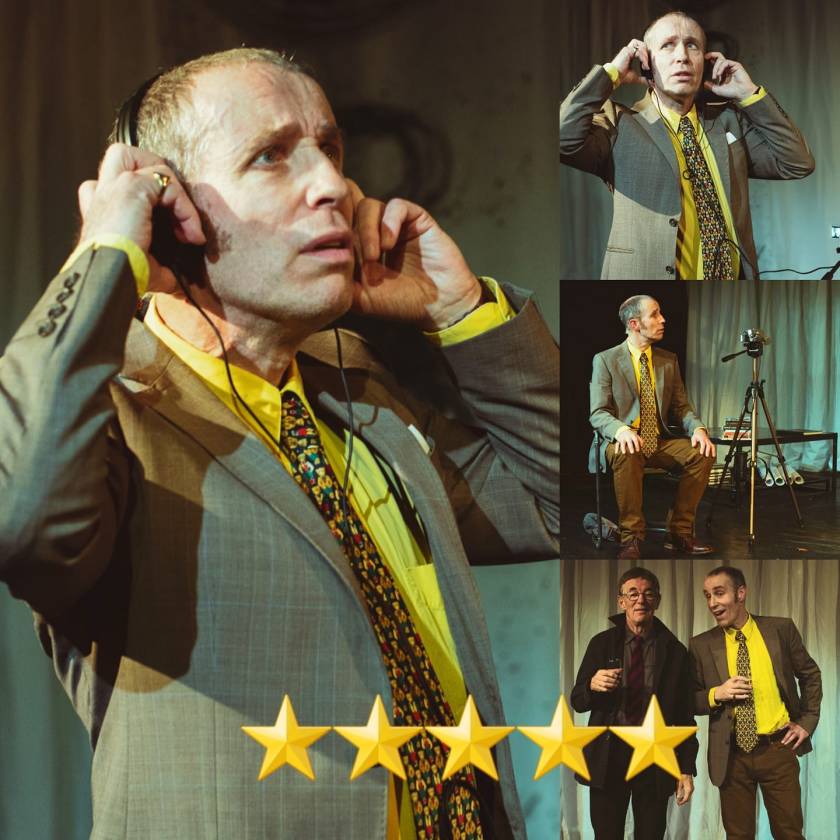 “I hear a kind of ..rushing sound, like a wooooosh!, or…wings, or something.”

Here’s the whole gang from our recent “Quality Street” show in Malmö. It was a great mixture of classic sketches from Monty Python, The Two Ronnies and Fry and Laurie, blended with scenes from Pinter, Willy Russell and Christoper Durang. All  nicely dusted with a sugar-coating of song and dance numbers.

Very good response from our audiences and as performers we had a great time.

I got to do my George Formby impression, which meant learning the basics of the ukulele in just four weeks. And it’s always fun to dress up in top hat and tails. I don’t usually look this debonair and sophisticated. 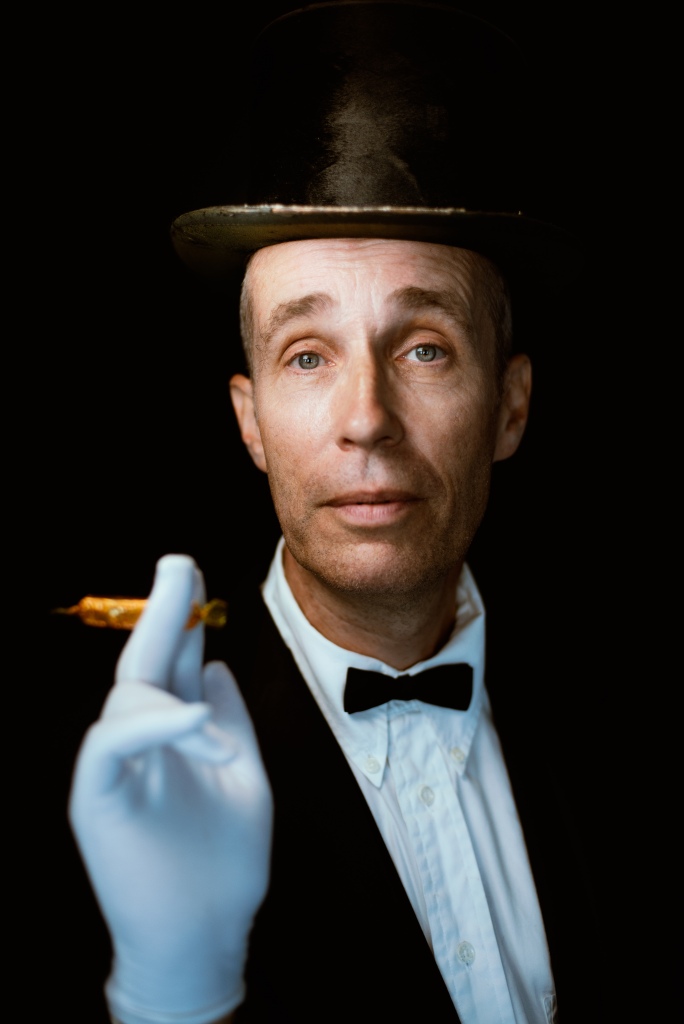 Slow progress here but it’s coming along nicely. Birds, fish and crocodiles seem to be the current theme, but things could, and probably will, change… 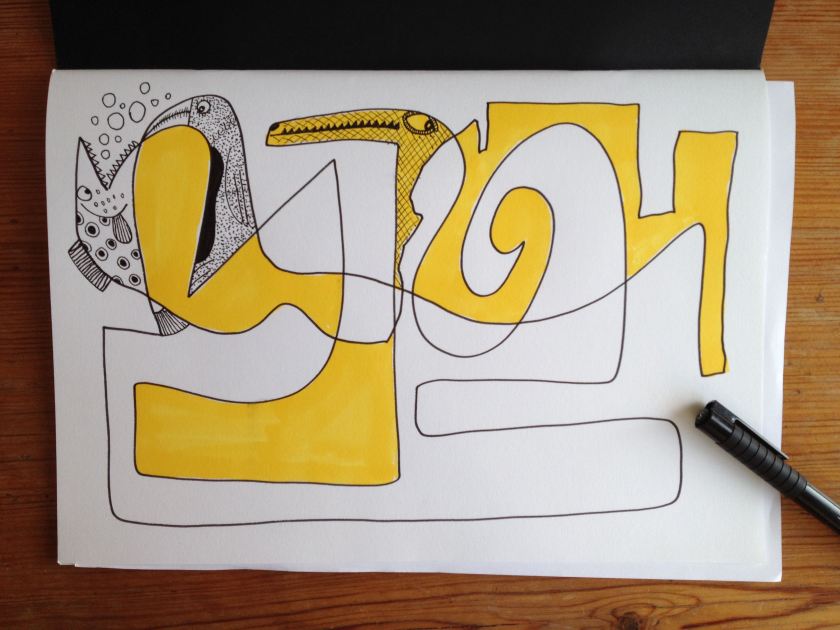 I don’t know if it’s correct to call this “work in progress”. It’s more like “play in progress.”

So, here’s step 1: a blank page in a sketchbook and a bunch of pens.

Step 2: I pick the sign pen and plug it in, via my hand and arm, to my brain… 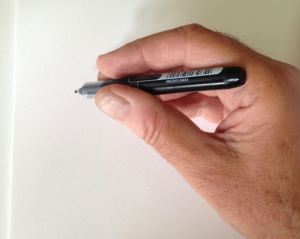 Step 3: What comes out is a free form doodle…

Step 4: I think this needs a bit of yellow. Don’t ask me why. I just feel that yellow is the thing to do here…

Step 5: Well…you’ll have to wait and see what happens next. 🙂

Here’s the latest of my squoodles (the offspring of a doodle married to a squiggle).

All of these are for sale as prints on Society6 or framed prints.

Next week I’ll be posting a work in progress.

Here’s the link to the online shop:

I posted some of these improvised doodles here a couple of years ago. I’m now churning them out and selling them as prints on Society6. Here’s the link:

Here are the first batch. Go in and have a look and let me know if you’d like to see any of these as pillow cases, mugs, bath towels, T shirts or whatever. 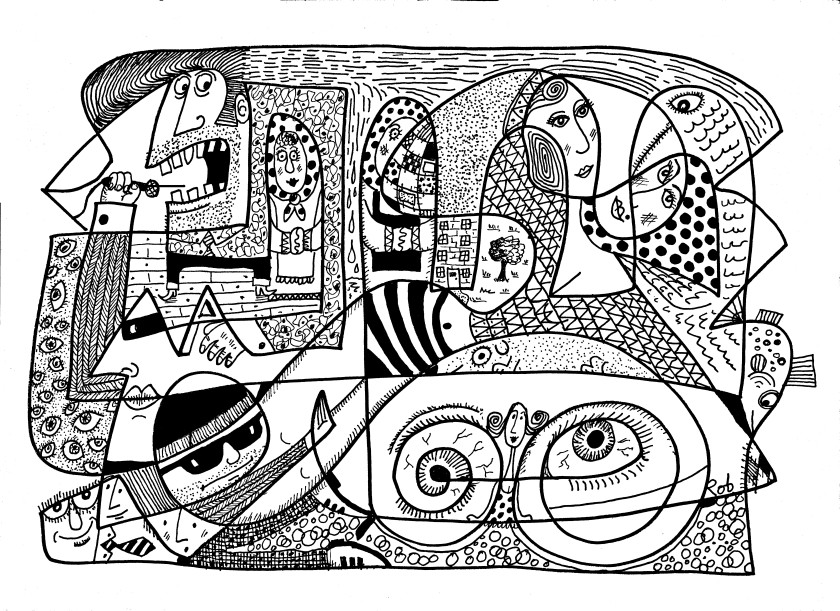 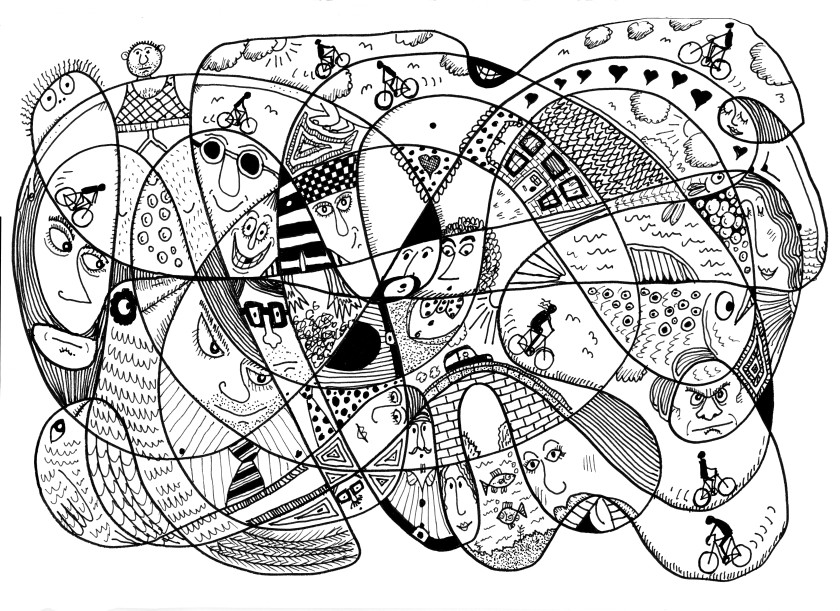 It’s been a long hot summer here in Sweden, and after absorbing massive amounts of radiation I’ve been inspired, finally got my act together and started getting my artwork “out there”.

So here’s a link to Society6, where I’ll be selling the stuff that’s wended it’s way from the nether regions of my brain down through my funny bone and onto paper. So keep your ears peeled and your eyes pinned back (or something like that) for more updates:

How about this? A new post in hot pursuit of the last one!

I’m proud to have been a part of this wonderful short film “We Were Three”, which had its world premiere at The Tribeca Film Festival today. Congratulations to Caroline Ingvarsson, the very talented director, and all the cast and crew: