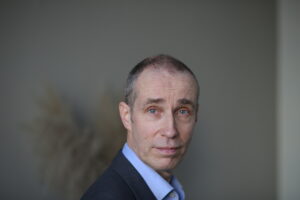 "Playing 'nonchalant' is often the most difficult attitude for an actor to communicate. Especially if you're 'playing' nonchalant, because that means you're not 'nonchalant'. Robin Gott is a specialist at it." (Galinsky, director/playwright)

I was raised in North London and was quite a shy, withdrawn child. I went to a school  on the banks of the Thames in central London. I was fortunate to have an observant English teacher at school, who also happened to run the small, fully equipped theatre we had at the school – “The Tuckshop Theatre”. He had a lot of contacts with the National Theatre, which was right over there on the other side of the river, and the Royal Shakespeare Company. He got me onstage.  I was 14. I was hooked. A whole world opened up to me. Here was a place I could express myself freely. We did a lot of Shakespeare and Pinter and had masterclasses with stage giants like Diana Rigg, Ralph Richardson and Simon Callow.

I immersed myself so much in theatre at school and in a youth theatre group outside that I flunked school. Drama school never occurred to me as a realistic option, so I fell back on my other talent – drawing.

I spent four very enjoyable years in art school, before being hurled out onto the busy London streets without a clue about what I should do.

During my 20s (”The Bullshit Years” as a friend called them) I drifted from job to job until I finally by chance landed a job as a trainee assistant animator with a large animation studio in London on a feature project. This was a great line of work and it somehow connected with my acting skills – I was acting on the page.

During my 30s I worked on numerous TV commercials. I also worked on TV series and feature films in London, Ireland and eventually Denmark. I loved the work but there was a price to pay. Sitting at a drawing table all day, with the pressure of deadlines hanging over me, I and my Swedish wife (who worked alongside me) both started to develop back and shoulder pain.

This led me to work with the Alexander Technique. I trained and became a qualified instructor. This  led me to work with actors and in 2013, after running a group workshop for a small theatre company in Malmö, Sweden, where I now live, I climbed back onto the stage.

I haven’t looked back since. My first film role was in one of the BBC’s ”Wallander Films”, where I got to act alongside Kenneth Branagh. It was an enormous honour and I fell head over heels in love with the whole process of film making and acting in front of the camera.

Since then I’ve continued to work in theatre, recently playing Greg in A.R.Gurney’s hilarious comedy, ”Sylvia”. I’ve appeared in TV series in Sweden, acting both in English and Swedish, commercials, corporate films and features.

Despite living in Sweden I am still essentially an Englishman. I love English beer, Yorkshire tea, baked beans, Double Gloucester cheese, and Tiptree orange marmalade.  I do, however, draw the line at Marmite.

I love acting and despite , or maybe because of, all the detours  it seems like my life has come full circle.